Who doesn’t love a little mini helper around while trying to film tutorials? 😀  Seriously my baby girl makes life so much more interesting, and I can’t wait until we have another one.  Which is just a little more than 4 month away! EEEEEP.
I haven’t don’t tutorials in awhile, but I forgot how much fun they are, so I hope you’ve been enjoying them, because I’ve sure enjoyed making them.

So I had the weirdest conversations with a customer service rep this morning, I know this is really random, but seriously, I’ve never had a phone call leaving me feeling so eery before.  The lady answers and doesn’t even say “hi thanks for calling…..blah blah” no, instead she’s like “hellooooo” in a really low, monotone, robotic voice.  I said “hi” but then she repeats again “hellooo” so immediately I’m thinking, is this an automated rep?  She kept the same robotic, low voice, and would leave like 2-3 second delays after everything I said before responding.  Seriously you guys, I spent the whole call genuinely trying to figure out what the heck I was talking to.  Finally at the end she started asking some questions that a robot wouldn’t ask, like “oh, when is your baby due?  Oh I was born in December too.”  She was nice, but ugh, it was so weird.  I literally called my husband right after because I needed to feel grounded talking to someone who felt normal.  Have you guys ever had an experience like that?  Anyway, hope ya’ll are excited for the weekend!  Thanks for reading. 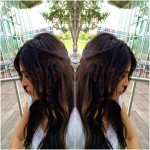 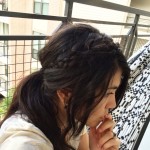 4 thoughts on “PULL THROUGH BRAID”