My husband moved offices last weekend. It’s super spiffy FYI…but anyway, that’s not what I’m writing about.  While he was helping get things wired and set up in the new location, me and the girls decided to meet him for lunch, his boss and partner ended up being at the office too, so they came to lunch with us.  We went to Panera Bread and while looking at the menu I was set on just getting a soup because nothing else stood out…which i wasn’t too keen on since it was 100 degrees outside.  Then my husband’s boss was like “keeeeno….kwan-o….kin-now”  I was like “keen-wha? (quinoa)Haha.  That made my ears perk up if he was talking about quinoa.  He pointed to where he saw it.  Greek Salad with Quinoa

BAM! SOLD!  And it was delicious!  I immediately started making mental plans to recreate it.  I was looking intently at each and every ingredient, disecting it with my eyes.  Daniel was like…”um, are you okay?” lol.

I had to go to the store that day so I of course had to buy all the ingredients to re create it!  And it’s so simple and yummy, and healthy!  For reals, you can’t go wrong with this.

Combine all ingredients in large serving bowl of choice.  Toss and ENJOY! 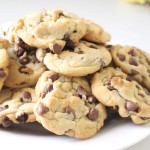