Dieter F. Uchtdorf came to the neighborhood we were helping!  Daniel and I were the very next people to the left (just cut out) of this photo lol, GRRR

My heart is so full…of gratitude, of sadness, of joy, of overwhelming love for those around me who have lost so much.  To be in the midst of a natural disaster (and not a small one at that) is so surreal.  I can’t even describe it.  The last week and a half have been an emotional roller coaster.  I’m not even exactly sure where this post is going to go, so bear with me…so many friends and family have been asking for updates…and with so much happening I don’t get around to responding or giving very good explanations.  So I’ve decided to try to put it all into words here for all to refer to.

As I’m sure the entire nation knows, Houston (our home that I am so proud to call home-and even more so since this event) was hit by a stage 4 hurricane-with stage 5 being the highest there is-we were alerted around Monday, but at that time it was just a stage 1, then by Friday it was stage 4 and too late to evacuate Houston (evacuating 6.5 million people in that short amount of time would be a disaster in and of itself).  So people prepared.  The grocery stores were cleared out of bread, chips, cereals and water.  Many stores had to start limiting 2 cases of water per customer.  Gas stations ran out of gas-yes, something that never even occurred to me as being possible-but amidst all this I felt incredibly calm.  I’m so grateful for prayer and peace that comes from it.  Also a lot of calm was due to our wonderful Texas family, who have a back up generator, well water and enough food storage to feed an army.  So we didn’t have to worry about losing power, or clean drinking water, and if we did happen to run out of our own food, they told us not to worry, that they had plenty.
Yes, I wasn’t ever worried for mine or my family’s well being, but there was an empty silence-like the “calm before the storm”-in my heart.  Because I knew this flooding was going to be bad, and I had a feeling it was going to be worse than I could at that moment imagine….I was right.

Believe it or not this was after the water had gone down! (just down the street from us)

For the next couple days we couldn’t and didn’t dare go anywhere.  School districts canceled school until further notice, we had no idea when Daniel would be able to go back to work.  We  just hung out together and watched movies, baked cookies, and took naps while the rain fell outside.  It didn’t take long before Facebook was blowing up-our church has a couple community pages to help us look out for and communicate with each other-with pictures of roads I had driven on so many times now looking like lakes, ponds or rivers.  And then my friends started to mark themselves as safe, or share pictures of the water getting closer and closer to their homes.  Then it got even crazier.  Just a couple hours later I’m learning that my friends are evacuating their homes, members of our church are going to different houses to get the furniture upstairs before getting people out. Next thing I know people all over the city are needing to be rescued by boat or kayak out of their windows.  One of my friends posted that she and her children were stuck in the house and another friend of ours called the first responders, so they were ok…but this same thing was happening over and over and over throughout the city.  I was so frustrated that I couldn’t do much because the roads to get out of our neighborhood were flooded and we couldn’t leave.

My heart was breaking…I’ve never seen Daniel so emotional for such a  long period of time…days…
still during all of this I felt at peace, and I felt the lord’s love, and knew that good would come of all of this.

“Gonna’ go save some lives”

I don’t know who first said it, but many are saying it.  That this disaster is in fact what this country needed.  It brings me to tears how people came together so quickly, without being asked, to help everyone and anyone they could.  Race, religion and political barriers came down.  People would just get in their boats and start searching for people to rescue.  Strangers would open up their homes to people who had no where to go.  Many churches of all religions opened  to house people.  My favorite grocery store HEB sent trucks and trucks of supplies and turned some of their semis into kitchens to feed the first res-ponders and other hungry people, hundreds upon thousands of donations came pouring in, and the list goes on.
I love this video of strangers forming a human chain to rescue an elderly man.

Back home in St. George Ut, my high school friend and her sister, Kailee among others raised thousands of dollars from people all over the country to purchase necessities for Houston.

FROM HERE, WE REBUILD
From here on out, it’s all about service, service, service!  Yesterday was a a once in a lifetime church experience.  We normally have a 3 hour schedule, but yesterday we went just for 1 hour, in work clothes!  Haha, yes, anyone who was going to go help gut out flooded houses to prep for the repairs was to come in work clothes.  lol.  So yes, we went to church in jeans!  We spent the rest of the day ripping up wood floors and tile.  It was so much fun working along side my husband.  We were very effective and had a good system for the incredibly stubborn wood floor.  He’s hold the pry bar strong and steady while I took a  sledge hammer to it, we were able to get under the wood and rip it up!  After 4 hours of that I am DYING of soreness today lol.

And then the coolest thing happened.  My favorite apostle, President Uchtdorf was suddenly in the middle of the cul de sac!  He’s making his way through the city to uplift, motivate, encourage and work with the relief efforts.  He hugged me and I felt so strongly that this truly was an apostle of the Lord, it made me tear up, the light radiating from him was so strong.

I’m looking forward to the next few weeks of rebuilding…not just rebuilding a few homes, but a nation.  We’ve been reminded that people are good, and that we take care of each other, and that service and love with helping hands are what truly makes us strong.  We’re all children of god after all. 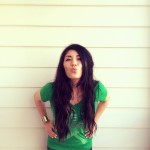