IT WAS SO BRIGHT AND THE GIRLS WERE SO TIRED LOL

*For those who might be wondering…No we don’t love Harley more than Kylie, we respect that Kylie doesn’t like having her picture taken 😉 Then you have her sister who loves it and eat them up, hence why Harley is in 3xs the amount of photos *

*I had a cute outfit for Kylie to post, but she didn’t want to wear it.  That girl has a mind of her own.

So we went to a “Pumpkin Patch” and I’ll just say we’re never going back. LOL.  I’m sorry that comes off as so snooty and ungrateful.  But let me tell ya.  It wasn’t even a  “patch” there were just random piles of pumpkins, you had to pay $5 per person–which also doesn’t seem too bad right?  Because they have a petting zoo, bounce house, train and tractor rides, so not too shabby right?  NO.  The $5 is to stand and melt in the sun while staring at piles of pumpkins that cost a butt load.  If you couldn’t tell we were thoroughly disappointed hahaha.  But we did get to see our friends we haven’t seen in forever.  And we was hilarious/sad to see how blah and tired the girls were.  I was able to get a fake smile out of Kylie and that was it. lol

However I will say they had cute photo op set ups, so we were able to get some cute pics-despite the BRIGHT sunlight haha.
I love FALL…I think I’m the only one who does-totally kidding, I sometimes feel like “who doens’t love Fall”  crazy people, the answer is crazy people don’t like fall.  It marks the beginning of all the magical festivities and good memories.  I love the smells, the colors, the clothes, the weather, the holidays, the decorations, the FOOD, you name it!  So I decided to share some of my favorite smells, food and decorations.  I could go through the whole list, but I’ll keep this post to a minimum.

MRS. MEYERS SOAPS-I just discovered these soaps and I LOVE THEM.  My favorites are ‘MUM’ and ‘APPLE CIDER’ (unfortunately they are just seasonal).  The ‘Radish’ is really good too (surprisingly)

CANDLES:
-Bath & Body Works ‘Leaves’
-(Walmart brand) ‘Mulled Cider’
‘Cranberry Manderine’
*These Walmart ones are the best because they are only $3 and they’re 3 wick (3 wick gives the best smell for some reason) 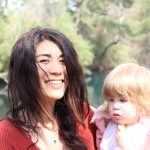 THANK HIM FOR THE GOOD DAYS…AND MORE WILL FOLLOW

5 ACTIVITIES TO DO WITH YOUR FAMILY UNDER $20